If you're hunting for a bed in a box mattress, chances are you're a little confused with what's out there. After all, there are something like 50+ online brands, so how do you make a decision? In this review we help you pick between Nolah and Leesa, both of which are foam beds, though, they feel quite different.

Let’s go through a brief outline of what you can expect from this review before we start getting lost in all of the details.

Yes, we love our videos and take a lot of pride in creating them, but we also realize that some people prefer to read about mattresses. As such, we have an entire written review for you below. 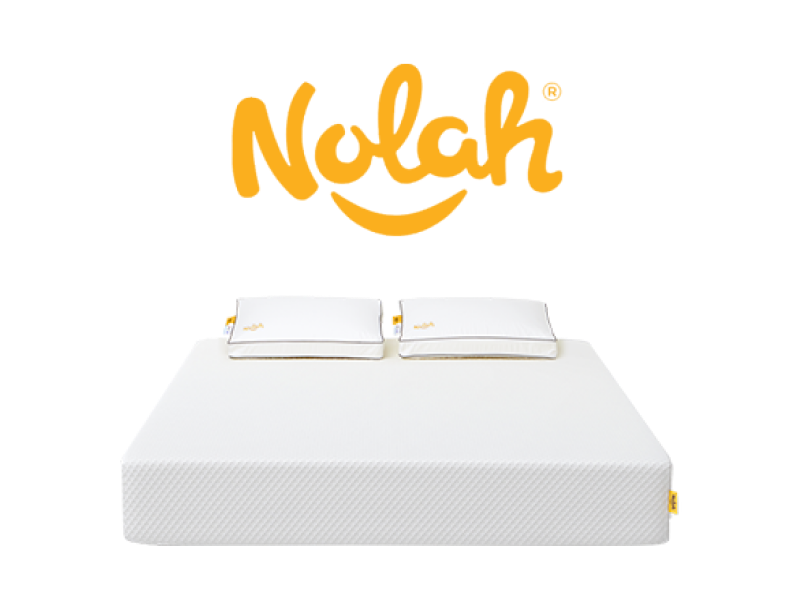 Why it’s Great
The Nolah mattress has three layers and a soft, unique profile that is somewhere between poly foam and memory foam. It’s built specifically for side sleepers.
Best for
Side sleepers and people that want a soft bed
If you’re looking for a bed-in-a-box mattress
Sleep Positions
Back, Side and Stomach
Product Details
Firmness
Soft
Type
Mixed Foam
Temp
Neutral
Free Shipping
and returns
Trial Period
120 Nights
Warranty
15 Years
Made in
USA

Up To $250 Off + Free Pillows Applied In Cart
Shop Now

Inside The Original Nolah Mattress

The overall design of Nolah might not be much different from Leesa—they’re both 10″ foam beds—but the exact materials inside are different and they feel different. Most of that comes down to the comfort layers, but let’s build our way up.

The base is dense poly foam, just like Leesa. We see this on almost all foam beds. Next is a transitional layer of responsive foam that’s a bit like latex foam. It’s primarily there to make it easier to rotate sleeping positions and also prevent sleepers from feeling the denser, firmer base foam underneath.

On top is a proprietary foam called “Nolah AirFoam,” which feels like a fluffy memory foam without the viscose feeling. In fact, we say “AirFoam” is similar to a fusion of poly foam and memory foam in that you get great pressure relief from the material, but there’s no sink-in, I’m-stuck feeling. Here’s a look inside the original 10 mattress:

As you can see in our side view above, the “AirFoam” makes up the bulk of the comfort layers. You really won’t feel much of the transitional layer unless you’re closer to 200 lb.

Wrapping the Nolah mattress is a super-soft, viscose cover that’s fairly breathable. Chances are, once you put sheets on the bed you won’t feel the cover much, but we do really like it.

A Blend Of Memory Foam And Poly Foam

As we mentioned above, Nolah feels somewhere in between a memory foam mattress and a neutral foam mattress. It’s fantastic at providing pressure relief, but you won’t feel trapped in the mattress since it responds back quicker than a more traditional memory foam.

Part of the reason that we want to draw attention to the overall feel of the bed is that it’s so unique. Most of the time when we test a memory foam bed, it has a fairly typical memory foam feel. Nolah will have the best of memory foam without most of the downside.

A Great Pick For Side Sleepers

While most foam beds are trying to please all people of all sleeping styles, Nolah goes right after side sleepers. It’s softer and is designed for people that want a lot of pressure relief.

Keep in mind that just because we really like the bed for side sleepers, that doesn’t mean that other sleepers need not apply. For petite back and stomach sleepers, we think Nolah will be just fine as well. We think average-size combo sleepers will be good too, but heavy folks should look into a different mattress.

For the most part, the heavier you are, the softer a bed will feel. And heavy people will wear through a bed quicker, which is the reason that most people suggest that individuals over 250 lbs try hybrid or innerspring mattresses first before they look into all-foam ones such as Nolah, or Leesa.

Another thing that you should be aware of is that all beds (present company included) will soften as you use them. They will start at one firmness level, but will become softer over time.

This has nothing to do with the quality of their products, but animal lovers will appreciate that Nolah donates to the Defenders of Wildlife, a non-profit that supports animals native to North America. For every mattress they sell, they donate to DOW, and they even allow you to select which animal you want to “adopt.” Again, this won’t impact their product, but it shows you where their head is at from a corporate standpoint.

The Original 10 is the mattress that most people think of when they bring up Nolah, however, they also offer a two sided flippable mattress called Nolah Signature 12. The Signature 12 mattress costs more, but it’s supposed to since it’s Nolah’s premium option. It has an organic cotton cover and two different firmness levels for you to try out. Here’s a look at the bed.

You can learn more about Nolah Signature 12 on the company’s website and in our main Nolah mattress review.

Why it’s Great
Leesa Original is one of the top five bed-in-a-box mattresses out there. It has a soft foam feel and is accommodating for a wide range of sleepers.
Best for
People that want a comfy foam bed
If you don’t have much of a budget
All sleeping positions
Sleep Positions
Back, Side and Stomach
Product Details
Firmness
Medium
Type
Soft Foam
Temp
Neutral
Free Shipping
and returns
Trial Period
100 Nights
Warranty
10 Years
Made in
USA

Truthfully, that’s not much of a price difference and we can’t imagine many people getting all hung up on paying $50 more for Nolah. That said, if you’re on an extra-tight budget, Leesa will frequently be cheaper than Nolah, after-discount.

You can check our Mattress Deals & Coupons page to see if we’ve spotted anything out of the ordinary for either company. History tells us that both brands will be under $1,000 for a queen size bed, but Leesa will be a smidge cheaper.

Leesa also starts with a dense poly foam layer, but it’s different from Nolah in the transition and comfort layers. For instance, the center layer is memory foam and is designed to offer pressure relief and also transition you away from the dense/firm bottom layer.

The top layer is Leesa’s secret sauce, and it’s awesome—though quite different from Nolah. Leesa now has a proprietary foam called “LSA 200,” which is airy and fluffy, yet immediately responsive. Here’s a look inside the bed.

In contrast to Nolah, which has the mixed, blended feel, Leesa has a truly neutral, soft foam feel. You really won’t feel the memory foam unless you’re flirting with 230 lbs, which means that most people will experience the “LSA 200” foam. You can easily rotate between sleep styles and yet Leesa is good for all of them.

We have to contend that Nolah would be our pick for side sleepers that want a soft mattress, but for all others, Leesa is equally good, if not better. It’s right down the fairway on the firmness scale, which means back, side, and stomach sleepers should be just fine.

As we mentioned above, the bed might start near a true medium, but it will get softer as you sleep on it. So, if you’re a side sleeper and you’re concerned with it being too firm, just give it time because it will become softer.

We mentioned Nolah’s charitable giving, so it’s only fair to bring up what Leesa does as well. Among other things, Leesa donates one bed for every ten they sell in their “1 For 10 Program.” They’ve donated something like 40,000 beds to date.

Just like Nolah, Leesa also offers an upgraded, premium mattress. In the past, the bed used to be called “Sapira,” however, the name going forward is “Leesa Hybrid.” What makes the Leesa Hybrid so interesting is that it feels similar to Leesa, but has 6″ coils to help with support.

Conclusion For Leesa vs Nolah

Like most of our mattress comparisons, this one comes down to firmness and feel. There are other items such as price, upgraded models, and return policies, but at the end of the day, the main differences are in feel and firmness.

Thanks for visiting The Slumber Yard. Hopefully this review answered all of your questions, but if it did not, make sure to look at our full reviews on our Mattress Reviews page.

You Get Free Shipping And Returns

If you’ve done any research about either brand, you probably know this stuff, so I will keep it brief. You get free shipping with Leesa and Nolah, and both beds will ship in a box.

Once you get the bed you have 100 nights with Leesa and 120 with Nolah to make your mind up. If you decide you want to keep them—which most people do—Leesa has a 10-year warranty and Nolah, a 15-year warranty.

If you decide you no longer want the mattress inside the test period, you can get all of your money back. That’s right. 100% free returns during the trial period. They will even send someone to pickup the bed, so there’s no need to worry about packaging or shipping.

McKenzie Dillon has been a member of the Slumber Yard team for two years and counting, and her resume includes hundreds of sleep-related articles from mattress review products to helpful blogs containing sleep tips, news, how-to guides, and more.